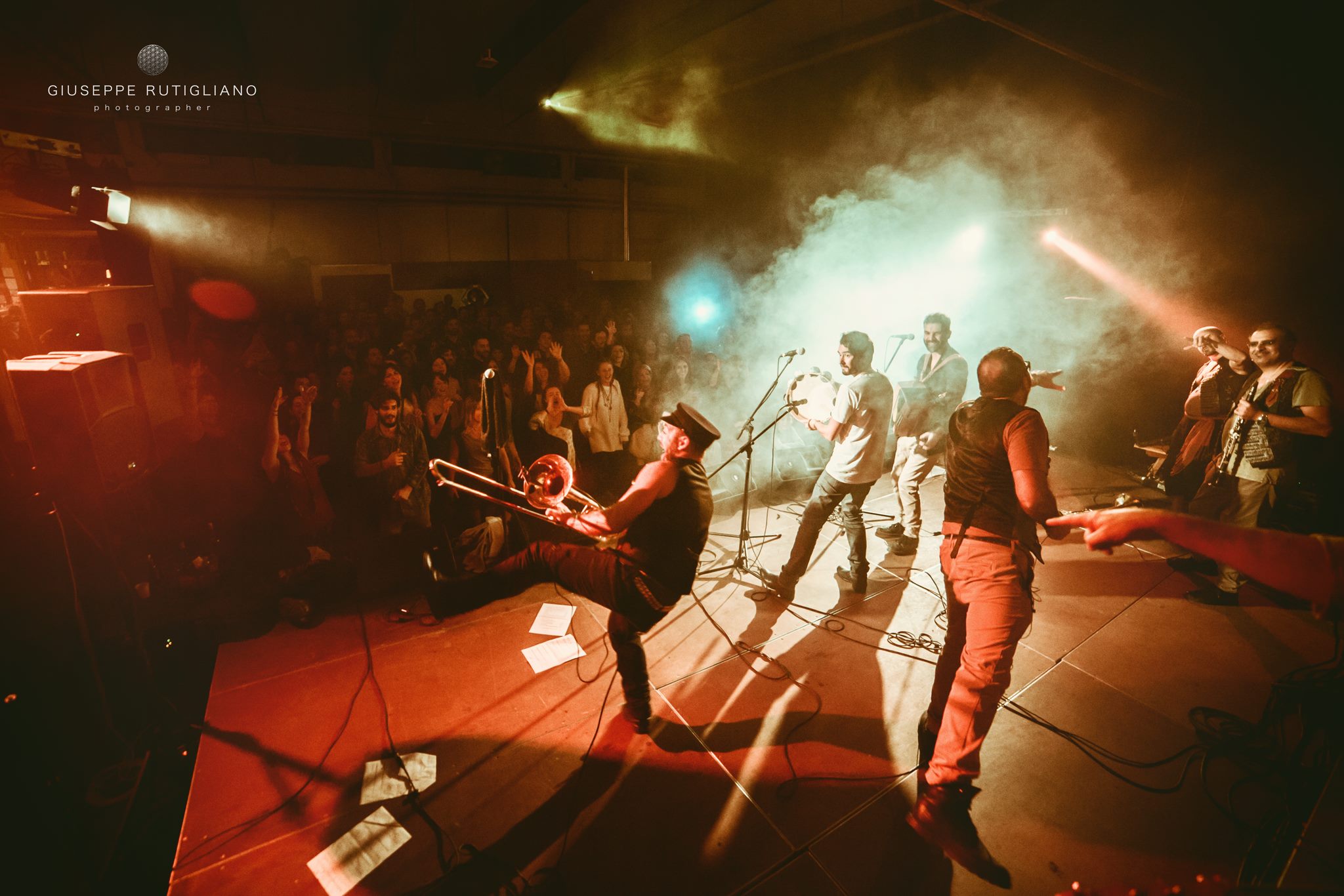 Transported by the swirling winds that illuminate the coasts of the eastern sea, the BandAdriatica rages on the agitated waves of Salento music with elements of all the Mediterranean sonic coasts as a complex “Babylon”, where the languages begin to harmonize on the popular melodies in the mestizo fervour of the harbours. That’s how the Apulian traditions take on a new resonance, starting from the frantic echoes of Salento music found in the sounds of folklore festivals, processions, funerals, serenades and night trips, taking it from country to country in ten years of research on the common musical matrices of the banks of the Adriatic Sea, reflecting themselves in the music of Albania, Macedonia, Croatia, the Serbian fanfare, North Africa and pushing up to the eastern Mediterranean. 2 The performance of the band has fascinated the critics at Babel Med 2017 in Marseille who defined it as “one of the best proposals of the whole Festival” and “one of the best Italian live-act”. BandAdriatica has collaborated with artists such as Bombino, Mercan Dede, Rony Barrak, Savina Yannatou, Chieftains, Burhan Ochal, Kocani Orkestar, Boban Markovic Orchestra, Fanfara Tirana, Eva Quartet, Cafer Naziblas, Fanfare Ciocarlia and Michel Godard

“Babel Med 2017 – third evening: The band of the evening that really surprised me was BandAdriatica… Very groovy and despite the powerful structure of the brass section that does not prevailed over the rest. The melodies and harmonies from Lebanon alternate with the Balkan groove. But even in fast instrumentals little nuances are not lost.

“The propulsive force that brings Bandadriatica to the exploration of new worlds of sound, new instruments and new melodies is not simple curiosity, but also the certitude of discovering new musical paths, going back to the common root that brings together all Mediterranean cultures” Blogfoolk (Italy)

“This is an interesting project that superbly integrates new composition with roots and demonstrates how easily music can cross national and linguistic barriers.” Michael Hingston – Folk Roots (UK)

“…Some orchestrations with clarinets remind me of those of the music of Nicola Piovani and the atmosphere is sometimes not that far from that of some films by the Taviani brothers..“ Jean-Luc Matte – Trad-Magazine (France)

“… Bandadriatica puts together different elements not simply by sticking them together, but encasing them in a musical language that encompasses them. This goal has been achieved. The album interprets an extremely amusing and pleasant trip.

“Contagio is a fully successful cd, a musical work where emotions easily reach to the heart…

… at Fira of Manresa 2015 the big surprise was BandAdriatica… it was like a bolt from the blue … and it sent an important message to the world: the music of balkan brass is perhaps along a dead end, but Italians are able to do more …