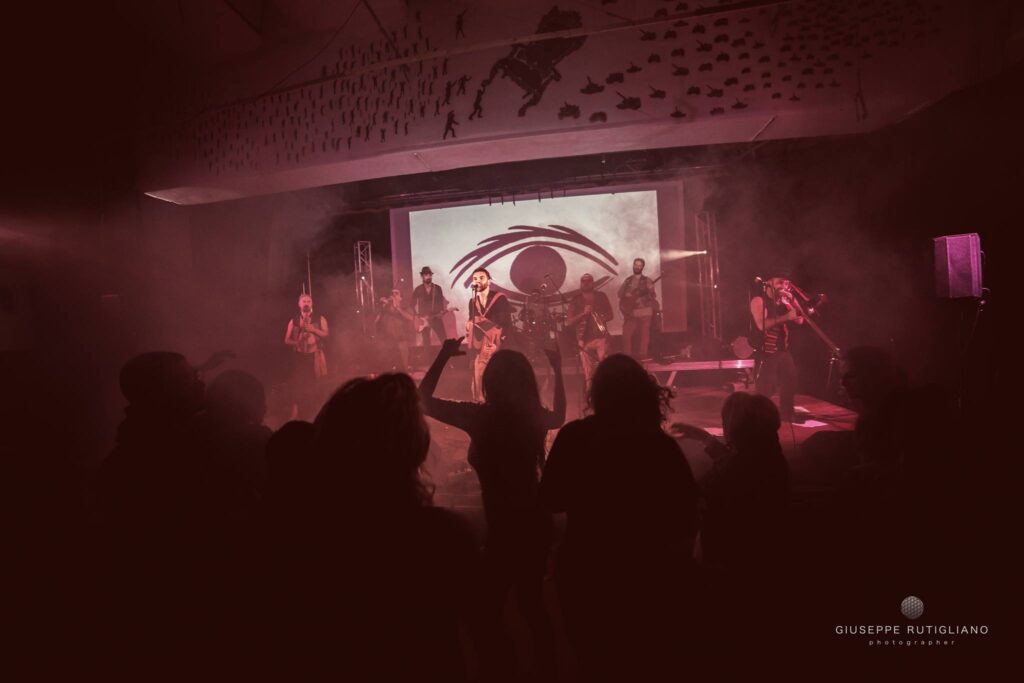 Multi-cultural music from Salento, right out in the middle of the Med.

From the shores of the Adriatic Sea come BandAdriatica, one of the most exciting Italian live acts at the moment. For more than ten years now these eight skilful musicians have mixed traditional music from Salento (southern Italy) with Balkan, North African, Turkish and Arabian elements.

The starting point for their Mediterranean odyssey is the Italian institution of La Banda, the musical groups that are the backbone of life in the villages and small towns of Italy. These traditional brass bands usually play at celebrations, funerals, parties and processions in Puglia and travel from town to town.

BandAdriatica is part of this grand tradition, but these days they play all over the world.

‘Banda’ (Italian for band) refers to the local Italian wind ensembles that originated in the mid-19th Century, both to perform indigenous folk songs and to bring the burgeoning music of Italian opera to the people living outside of the major cities.

The tradition continued, though it was entirely ignored by the musical establishment in Italy.

For about the past ten to fifteen years innovative Italian bandas such as Banda Ionica from Sicily, the groups Opa Cupa, BandAdriatica and Municipale Balcanica from Salento and Banda Olifante from Romagna have not only been taking up the concept of that creative social cooperative of the banda, but also updating, urbanising and globalising banda music.

BandAdriatica were formed in 2006 and are fronted by the diatonic accordeonist, singer and composer Claudio Prima, who also leads several other ‘boundary-crossing’ musical projects such as Adria, Tabulè, Tukrè, Giovane Orchestra del Salento and Manigold.

“The tradition of the banda is a part of the life of the people of Salento. Every town has its own celebration with a banda playing in the streets and on the square, passing from window to window. Playing in a banda is something unusual because it means playing 120 concerts in thesummer. You arrive in a city or town early in the morning and are outside all day ’til late at night. You play at the processions and the midday celebration and of course at night when you play the bolero, the last song, everybody wants to hear. You may be familiar with the banda from Fellini movies but for the people of Salento it’s real and alive. The bandas are closely linked with the social life in the small villages. It functions as a school of music because it is people’s first encounter with an academic way of playing music. You can learn to play clarinet, trumpet, flute, trombone and percussion.”

All the musicians from BandAdriatica also play in different bands and projects because “living as a musician in Italy means you need other jobs. You can’t survive if you only play in one band, even if you do 50 or 60 concerts in a year. So that’s why all of us cooperate in other bands but BandAdriatica is our main project. It’s like a family. We have been together now for eleven years, we are a very solid group of good friends. Every time we meet it’s a new opportunity to share this wonderful experience of making music together.”

With Babilonia, their fourth and latest studio outing, BandAdriatica focus their attention on music from Turkey, Lebanon and Armenia. “BandAdriatica is starting to sail more and more toward the East, looking for the common traits among the various traditions, to rewrite traditional music through original tunes and songs.” BandAdriatica were formed on a boat trip on the Adriatic. “Whilecrossing the Adriatic Sea, we were playing music. When we arrived to the harbour of Dubrovnik we just felt like a banda. Instead of going from to door we went from harbour to harbour, it was magic.”

“When we play a Lebanese or a Turkish song we are very much aware of the tradition of these songs. At our concerts we invite the audience to come onboard for one night and just share our music because our words are not enough.”

“Our starting point is the music from our region, Salento, because you have to understand where you are coming from. In the beginning we sang in Italian, Albanian, Croatian but now we sing in Salentu, the dialect of Salentino because it’s is more universal as a language. Sometimes when we speak in Salentu people understand us better than when we speak Italian. When I sing in my dialect I feel more authentic, more connected to my roots.”

“Our music cannot exist without emigration. Every Italian has family members that have migrated to other European countries, the USA or Australia. So how can an Italian mistreat somebody who’s coming from another country or culture? In Italy you can find influences from many cultures, like the Etruscans, Samnites and the Romans but also the Phoenicians and Greeks. Our music is the sum of many cultures.”

“Many people believe that tradition is static but it’s exactly the opposite. Tradition is always in motion and evolving constantly. Every epoch has its own tradition.

We are making tradition now with our music. The only thing you have to do is try to be honest. Try to play the best you can. If you are really honest with yourself, you are traditional because we as human beings are traditional”.